in the Republic of Macedonia

Respecting the free and democratic will of the Albanian voters expressed in the early parliamentary elections in the Republic of Macedonia, on December 11, 2016;

In the spirit of the Ohrid Framework Agreement, consensual democracy, and the need to fulfill normative obligations deriving from the constitutional amendments;

Affirming the joint programatic and strategic orientations of the Albanians and all citizens of the Republic of Macedonia;

Committed to prosperity and long-term stability of Macedonia;

Led by the joint commitment to peace, stability, security, interethnic cohabitation, in the spirit of equality and dignity, in line with European and international conventions, religious harmony, and cooperation in the country and the region;

Determined, without any alternatives, to the integration in NATO and the European Union;

We agree to mutual support for a common political agenda that envisions the achievement of following objectives, during the next, or any other following, government mandate:

The accomplishment of these objectives will be supervised through the establishment of a Roundtable of Albanian Parliamentary Parties.

The Roundtable of Albanian Parliamentary Parties shall function according to the principle of rotation and shall serve as a platform for the harmonization of political actions and transparent communication with Macedonia’s international partners, while seeking in particular the support of the European Union and international institutions.

The Roundtable shall determine the deadlines for the accomplishment of the above-mentioned objectives, in accordance with the laws and the Constitution of the Republic of Macedonia. 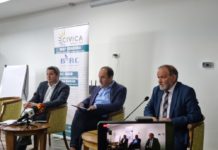