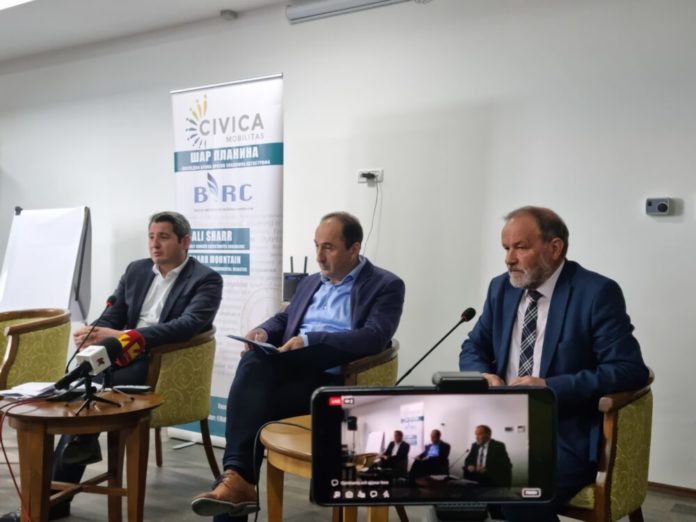 The conference “Sharr Mountain, the gem of the region”, has opened the debate on the management of national parks, brought different experiences, and at the same time affirmed the idea of cross-border cooperation towards joint projects, which enable environmental protection and socio-economic development for local residents.

The Balkan Institute for Regional Cooperation (BIRC) concluded with a regional-level conference on the “Sharr – the pearl mountain of the region”. The conference was organized in co-operation with the Ministry of Environment and Spatial Planning of Northern Macedonia. The conference concluded an 18-month trajectory of activities designed as part of the project “Sharr Mountain-the last dam against natural disaster” funded by the Civica Mobilitas project. The conference was brought together in one place, in the hotel “Scardus”, in Popova Sapka, the Minister of Environment of Northern Macedonia and Kosovo, Naser Nuredini and Liburn Aliu, the Deputy Minister of Environment in Albania, Ornela Çuçi, as well as representatives of society civil. The green European agenda and opportunities for cross-border cooperation, the role of civil society in the management of national parks, and the socio-economic development of settlements gravitating within the national park have been the focus of this conference. In the opening of this conference, the executive director of BIRC Bardhyl Zaimi, stressed the need to protect the environment as a predisposition to maintain human harmony with nature and for sustainable development. He also stressed the commitment of BIRC in raising awareness for the announcement of Sharri as national park.
“In order to preserve the environment, to preserve nature, we for 18 months together with other actors of civil society, institutions and so on, have opened a substantial dialogue, precisely in the direction of declaring Mount Shar a National Park.” .

In his speech at the panel discussion on “The Green Agenda of the European Union and the possibilities of developing national parks in the Western Balkans”, the Minister of Environment of Northern Macedonia, Naser Nuredini, emphasized that as an institution they are deeply engaged in managing best of the national park.

“With this, we want to create management, a regularity in the activities on Mount Sharr. There are also different areas where they will be defined. “We are now concluding with UNEP and IUCN and international experts, where we are preparing a national park management plan,” said Nuredini. The need to establish cross-border cooperation in terms of exchanging experiences for proper management of protected areas in a cross-border context was discussed at the conference, as well as opportunities to use the great potential for socio-economic development of the Sharr Mountains.

He stressed that the draft plan for the management of Sharr Mountain National Park envisages programs that include the aspect of cross-border cooperation for nature protection and tourism development, so the future is in establishing good cross-border cooperation in the management of the protected area we share for to be able to protect nature but also to use the great potentials for sustainable development, especially the opportunities offered for the development of eco-tourism, because by strengthening local economies the area will develop, and the young population will find its interest in the place where he lives.

In the panel discussion of this conference, the Minister of Environment of Kosovo, Liburn Aliu, stressed that the declaration of a national park is necessary in order to protect the values ​​of nature throughout this territory.

“The fact that today we declare a National Park, it falls to this part of nature, over the centuries has survived and developed as it is and people have used it without harming it. Now, because technological and economic development everywhere in the world has gained tremendous momentum, we feel that perhaps this natural beauty may be endangered by economic development and it is imperative that we declare a National Park in order to protect the values ​​of nature in all this territory “, Aliu emphasized.

Aliu saw this conference as a good opportunity to exchange experiences, give ideas and create cross-border cooperation networks, always aiming to protect the natural resources of Sharr, develop tourism and better manage the National Park.

As a key issue in the panel discussion, it was emphasized that through joint engagement to find different modalities for the protection of Sharr natural resources, tourism development, and proper management of Sharri National Park. The panel discussion also touched on many other issues, which directly affect the management of the national park. Cross-border cooperation to implement joint IPA-funded projects has also been the focus of debate.

Two ministers have expressed full readiness for cooperation and for the transfer of experiences in the management of the national park. It is also emphasized the fact that Sharri represents a mass with extraordinary biodiversity that must be institutionally protected.

In the second panel, the focus was on the topic “The role of civil society in the protection and development of national parks.” The coordinator of the project funded by Civica Mobilitas, Lorik Idirzi, presented all the commitments of BIRC in terms of nature protection and the declaration of Mount Shar national park. “In 2017 we made the first documentary on the topic “The announcement of Sharr National Park”, which reached record ratings. This raised the awareness of both the public and the competent officials who create policies. That year we also organized the conference, where officials met with representatives of the civil sector to work together to achieve the same goal. These two years BIRC, with great support from Civica Mobilitas, but also from the Ministry of Environment and Spatial Planning, has made a total of 6 quality documentaries, more than 30 promotional videos, studies, journalistic research and interviews, on the topic Sharri National Park “, Idrizi emphasized

The representative of the Coalition “Friends of Sharr”, Metin Muaremi, stressed the need to continue with activities and awareness, but also with comprehensive cooperation towards the implementation of the national park. According to him, it is not enough just to announce, but it takes permanent commitment of all to better manage the national park.

While, Irfan Misini from the association “Sharri Bear” has emphasized the need to protect the fauna on Sharr Mountain, respectively in the national park. According to him, it remains very important for institutions to work with local residents when managing the national park, because they know better the problems and challenges.

In the last panel “How can the regional cooperation be increased in the protection of Sharr assets and the development of national parks?”, University professors, Besnik Rexhepi and Daniel Bogner, environmental expert have revealed the challenges of managing the national park and transfer of models and experiences from European countries so that the national park finds the way of development and affirmation as an opportunity to promote mountain tourism and other forms of tourism.

In an open dialogue with the two experts, Ibrahim Deari, director of PE “National Park – Sharr Mountain”, stressed the difficulties of management, but also the possible solutions that should be provided and included in the management strategy so that residents feel the benefits of the national park.

The daily conference “Sharr Mountain, the gem of the region”, has opened the debate on the management of national parks, brought different experiences, and at the same time affirmed the idea of cross-border cooperation towards joint projects, which enable environmental protection and socio-economic development for local residents.