Controversial, contentious, harsh in his attitudes that quite often contain the language of hatred, the new elected president of the USA, Donald Trump, has a lot of similarities with the nationalist politicians in the Balkans. The counter-candidate from the Democratic Party, Hillary Clinton, on the other hand, was a well-known person in the Balkans due to her husband’s, the former US president, Bill Clinton’s active role in preventing armed conflicts in this region. Trump is known as an autocratic and conservative candidate – a frequent profile in the political arena in the Balkans, whereas Clinton – a democrat and liberalist represents the representatives of the new political generation in this region.

In fact, Trump and Clinton have caused polarization in the countries of this peninsula as well. These presidential elections have attracted great interest among the peoples in this region as never before, as well as division and separation among them.

In January of this year, the President of the Radical Party of Serbia, Vojislav Sheshelj, openly supported Trump. This ultra-nationalist politician, who was accused by the International Court of Justice, called upon the Serbs with American citizenship to vote for Trump, because, according to him, it meant “a vote more for the future of Serbia”. The reason why Sheshelj and other Serb radicals have decided to support Trump is his hard line and adverse approach against the Muslims as well as his announcement in favor of friendly relations with Russia.

“He is a friend of the Russians and wants an agreement with them. Vote for him because he is also a friend of the Serbs” Sheshelj told his supporters wearing t-shirts with Trump’s face on them.

On the other hand, in Bosnia and Herzegovina in November there was a meeting called “Sarajevo votes for Clinton” in order to show the support for the democratic candidate by the Muslims of this country. In the capital of Kosovo, Prishtina, an avenue has been named after Bill Clinton, whereas his statue was erected in the central square of this city.

Sheshelj and his followers’ hatred against Clinton date back to 1999, when NATO forces bombarded Serbia which was under the rule of Slobodan Miloshevic at that time. This military action was undertaken to prevent crimes against humanity and genocide in Kosovo, at times when armed guerrilla forces were battling the Serbian governmental forces. NATO’s airstrikes on Serbia forced Milosevic to withdraw his military forces from Kosovo, while causing a lot of infrastructural damages and casualties in Serbia. NATO’s role was decisive in terminating the war in Bosnia and Herzegovina. The figure of the then American president Bill Clinton has remained in the collective memory of the Muslim and Albanian population in the Balkans as the savior, the leader of military interventions that prevented further and greater tragedies in this area.

A real battle was going on in the social media network whereupon Trump’s and Clinton’s supporters were looking forward to the election results.

Besides the ethnic and religious aspect, other political groupings with different ideologies have also turned to Washington D.C. Barack Obama’s eight years of presidency are seen as support for the liberals and the left-winged in the Balkans and a rejection of the right-winged who seem not to be able to establish good relationships with the American diplomats. The pro-governmental media in Macedonia gave more space to the republican Trump by supporting him, whereas they only report the affairs of the democratic candidate, Hilary Clinton. There are early elections which were organized in December in this country, after a crisis caused by the revelation of corruptive and other affairs by the left-wing opposition. The Macedonian conservatives have quite often accused the American diplomats through their media of being responsible for the crisis, and Trump’s victory is seen as a turning point of the American politics in relation to Macedonia.

At the time when the EU is facing an existential crisis, the European integration is decreasingly seen as offering a solution to the problems the citizens of these countries have been facing with. The clash between the west and the east seems to involve Western Balkans more and more, while it has not overcome the hostilities and enmities from the wars in the former Yugoslav area which caused its ultimate dissolution. The election of Trump as president of the strongest country in the globe – the USA are considered in the Balkans as determinant in terms of the future of its nations and different ideological groupings that currently function. 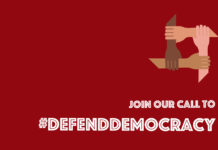